I am writing today about cause that is dear to my heart - women's safety and changing ideas about sex crimes. Women who fall victim to sex crimes are often blamed as having played party to the attack for their style of dress or appearance. In other words, if you dress like a slut you deserve it, you deserve violence.

This couldn't be further from the truth. Women (and men) are attacked in sex crimes - rape, assault, molestation - whether they are dressed proactively or not. The issue is not what people are wearing, it's that these crimes exist and that the victims are blamed, in part, for those these crimes taking place.
In protest of those ideas, the Busan team of the organization Don’t Do That (성범죄인식개선캠페인 돈두댓) is hosting a Slut Walk, an event where women and supportive men gather together and walk in protest of the idea that women's dress puts them at risk for sexual violence.

Please note that unlike Slut Walk events held in other areas, the organizers this event are asking attendees to dress conservatively. This event has been organized by and for Korean women, so I think it best to mind their request. Also, if you will be attending to take photos, often people will wear ribbons on their arms to indicate that they don't want their face photographed. I am not sure if this will be in place tonight or not.

If you want to join, please meet in front of Judie's Taehwa, Exit 1 at 6 PM. You can find more detailed information in English on The Grand Narrative, where further links for Korean information are provided. It's a great website and definitely worth a look through. Hey, it's where I found this info!

Another post to follow the event! Sorry this is so brief. I will try to provide more details, context and criticism following the event.
Posted by Jessica at 20:56 1 comment:


We've all heard about public schools and the infamous hagwon or private academies in Korea, but ever wondered what life is like at Korean universities? My article "Korean University Life" has been published on the Korea Blog, the final product of interviews with over 100 students.Check it out here: http://blog.korea.net/?p=14268

Thanks for reading!
-Jessica
Posted by Jessica at 02:04 No comments:

Supporters Over the Moon as Candidate Ends Campaign in Busan

Campaigns for South Korea's 18th presidential election were in full swing in Busan tonight, with only hours remaining on the clock before the opening of the polls tomorrow, December 19th. Candidate Number 2, Moon Jae In, the leader of the opposition Democratic United Party (DUP), arrived at Busan Station at approximately 9:00 PM, greeted by a roar of applause and shouts from his supporters. 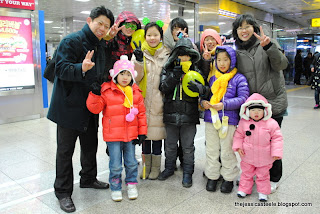 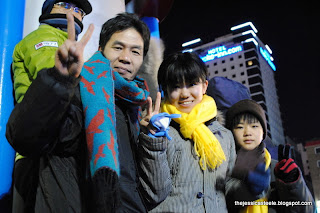 The party faithful arrived early to secure the best spots for viewing the action and to catch a glimpse of their political hero. Dressed in layers and heavy winter gear to battle the negative temperatures, supporters jumped and waved before Moon's arrival not just out of excitement, but for warmth. Many sported scarves, hats and jackets in the bright yellow and green colours of the DUP. Supporters of all ages braved the cold to see Moon, and they waved banners, balloons, and over-sized taegukki, the flag of South Korea. Elderly men shook their fists in support, their skin cracking against the cold, while young fathers hoisted their babies onto their shoulders so that they too could see commotion. Mothers, daughters, and granddaughters clung to one another, their faces wrapped in masks and their hair covered in hoods. Couples young and old smiled and shouted to one another, and families seemed to group together, their children bouncing with anticipation. 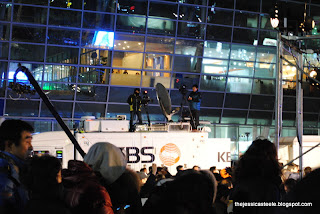 News crews orbited the stage and reporters shed their winter coats for the camera, standing stoic in their suits despite the wind chill. All around them shouts and laughter could be heard; music blaring, and flashes popping. A hush fell over the crowd for just a moment as Moon finally arrived in view, and was followed instantly by an uproar of screams, whistles, and chants. "Moon Jae In, Daetongryong! Moon Jae In, President!" they shouted as every man, woman, and child was swept up into the excitement. "100%!" they promised and "Vote, vote, vote!" they pledged to a smiling Moon, waving with a black-gloved hand. 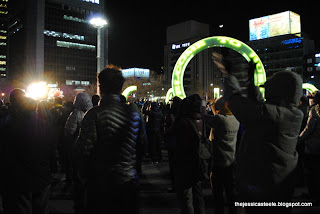 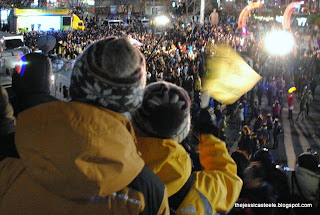 He approached the stage built into an 18-wheeler truck and outfitted with a large screen. "Friends, thank you!" he greeted them in the honorific form, bowing and smiling. He looked into the audience, his grey hair shining and his face glowing against his yellow parka. He began to speak, pausing every few minutes for applause and the spontaneous cheers that erupted from the crowds. All around people balanced on tip-toes and stretched their necks for a glimpse of the presidential hopeful. Shutters snapped and smart phones could be seen held high over heads, recording every moment. "People come first," his campaign boasts and in this moment, people were united by his promise.


As neared the end of his speech, Moon's voice cast out over his increasingly joyful crowd who roared with delight at his every syllable, their applause thundering as he implored them to vote. "100%! 100%!" came the cries again, as Moon accepted flowers and posed for photos before he was escorted off stage by his smiling aides. The Korean national anthem followed, every member singing, swaying, and hugging; hands on hearts or in the air, their fingers shaped in a peace sign to represent the number two, for candidate Moon Jae In. Only moments later, one last burst of energy was summoned and a dance party broke loose as soon as a loud, thumping, upbeat melody filled the air. Teens twirled while seniors shuffled but everyone felt compelled to move in some way. The dancers, the singers, and all the supporters were thanked once again before they scattered, rushing to the train and subway stations, excitement not yet fading. Costumed workers reminded everyone to vote before dashing off to seek warmth for themselves. And just like that, it was over, the trucks and clean-up crews having removed nearly every trace of the event within twenty minutes of its conclusion.

Of course, the main event is yet to come, and nothing certain is concluded just yet. Will the victor be Candidate1, Park Geun Hye of the ruling Saenuri Party, Candidate 2, Moon Jae In and the Democratic United opposition, or a surprise victory from the independents? Along with the citizens of Busan and the rest of the country, I eagerly await the results of this, the 18th presidential election of South Korea.

Readers, what do you think? Who will win the election and where would you cast your vote? I'd love to hear your comments!

I'm pleased to announce that my third featured article, "Dynamic Busan" has been published on The Korea Blog, the official blog of the government of South Korea. This article explores the must-see places in Busan, as well as those little quirks that make the city so great.

Enjoy, and thank you for your support!

Love,
Jessica
Posted by Jessica at 03:30 No comments:


I'm pleased to announce that my second featured article, "Coming into Bloom with the Garden of Learning at the Busan Biennale" has been published on The Korea Blog. In it, I explore this year's edition of Busan's biannual art exhibition offering insights into the artworks and the exhibition's focus on collaboration.

Jessica
Busan, South Korea
I'm a lucky young woman who has had the wonderful opportunity to live and travel in South Korea. My time here has taken me all over the country, and this blog folows those adventures. Enjoy!

This site is dedicated to documenting my travels and observations of my home away from home, South Korea. All photos, writing, and opinions are my own, unless otherwise stated, and I'm darn proud of it!
Thank you, and enjoy your stay on my site. Come back and visit soon!

I Write for The Korea Blog

I'm an official blogger for the Government of Korea!

Love Me Some Letters