I was sitting in Busan one day naively thinking I'd seen it all, when this wonderful city surprised me with something new yet again. At the suggestion of a friend, my boyfriend and I made our way to the Gamcheon Culture Village, a picturesque art-adorned village perched high atop a hill overlooking the city and the sea.

We hopped on the subway early on a mid-week holiday morning, the subway lines bustling with the activity of a day-off from work. We were without seats until just after Busan station when the crown thinned and we were left to our own until our stop at Toesong station. We emerged from the underground, blinking against the now hot daylight, and heading over to the tiny bus shelter to continue on the next leg of our journey. We shared the tight spot with a few older Koreans also seeking shade. An elderly man with silver teeth asked us where we were from. "Canada and New Zealand," we replied and he smiled, satisfied. He had once been to New York he told us. I wish I knew more Korean to ask him how he ended up there. Our little ten-seater mini-bus pulled up then, and then the little bus pulled hard to tote our medley crew up the steep, steep mountain. 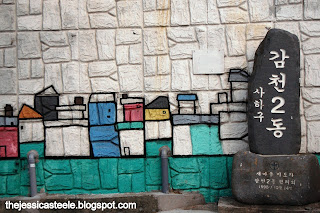 It was an exciting ride, winding up the hill at top speed, and hurtling side-to-side. I laughed out loud with glee, receiving some surprised smiles from the elderly Koreans around me. I couldn't help it. The ride was too surprising and too novel to keep my laughter inside. Our friend who recommended the trip hadn't found it quite so novel, and I must admit it was a bit more terrifying on the way down in the dark later that evening.

Just a few minutes later, that ramshackle bus rumbled to the top. When the bus halted to a stop and looked as though it could no further, we knew we were there! Leaving the bus with residents and fellow tourists, we were struck by how bright it was, and how immediately colourful. The elementary school across the street was glowing, as was the painted brick wall around it. The tourist map beamed at us, hung from a post shaped like a rainbow. We consulted the map, soaking up the promise of art and novelty. 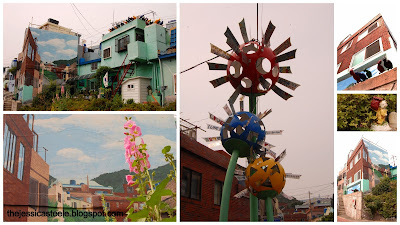 Heading down the street directly opposite the elementary school and our bus stop, we stopped for photos within moments, admiring some trick art on the side of building and some novel sculptures. In our excitement, we passed the Art Shop, a cute little building set just below street-level with a painted roof. We had to return there later to pick up a guide map. The colorfully-illustrated map cost just 1,000 won and doubled as a stamp page for collecting stamps at seven featured art locations. Those stamps earned us a prize of two postcards or a photo each at the end of the day! We collected our prize at The Haneul Maru or Tourist Information and Observatory Center, directly up the steep stairways opposite the Art Shop. Haneul Maru also sells maps as well as souvenirs and admission to art experience programs, and there we also learned the history of the town. 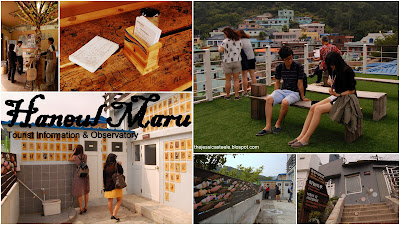 Gamcheon Culture Village is located in Gamcheon 2-dong, in the Saha-gu or Saha district of Busan. Also known as Taegukdo Village, it was founded during the Korean War when war refugees fled to Busan, one of the few parts of Korea that remained free from fighting. An estimated 800 shacks were erected along the mountainside, housing nearly 4,000 people. The majority of those people were followers of the Taegukdo religion, a religion that believes that the Taeguk, or yin and yang symbol, represents the true meaning of life and the universe. Believers from across the country relocated to the village, and the Taegukdo headquarters was eventually moved there. While the buildings themselves have changed from wooden shacks to concrete blocks and few residents today are believers of the religion, the town retains an ethereal, moment-lost-in-time feeling with its rambling streets, little nooks, and Lego-like buildings scattered up the mountain. 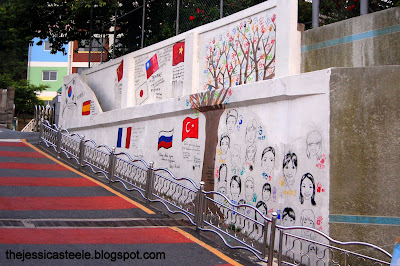 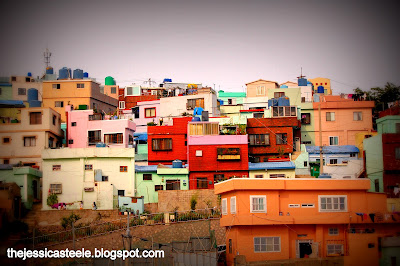 Although the village had remained relatively poor since its war-torn beginnings, in 2007 it was re-conceived as a historic and scenic landmark, undergoing reparations. In 2009 the Dreaming of Machu Picchu in Busan project was undertaken, installing ten artworks by professional artists, some created with the assistance of the residents. In 2010 the Miro Miro project saw the the addition of twelve works, including alley paintings and path markers, tying in neatly with the miro theme, miro meaning "maze" in Korean. These days visitors can see trick art, sculpture, quirky paint jobs like cow-hide-patterned buildings, and even rooms or buildings remodeled around a singular art concept, such as the Book Cafe shaped like a giant coffee mug, or rooms interpreting themes such as "peace" or "darkness". 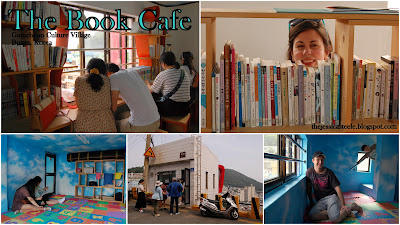 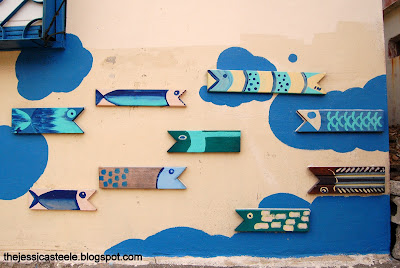 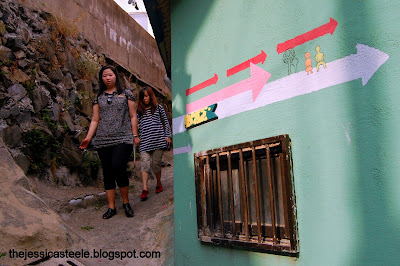 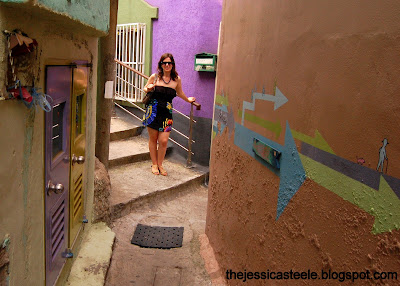 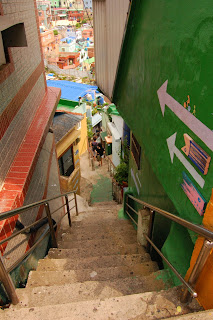 You can see the seven featured artworks within an hour, but half the fun is strolling through the village, absorbing the history and the sights. The village is situated in such a way that it overlooks the sea and is bathed in sun from every angle. The ever-present sunshine lights up the multi-coloured block houses in such a way that you believe that you've accidentally wandered into a children's book or a fairy-tale. My boyfriend and I had such fun meandering the sunny streets that we stayed until we crossed off every landmark off of our map, photo-snapping and wandering for nearly six hours!

Some notes about visiting: 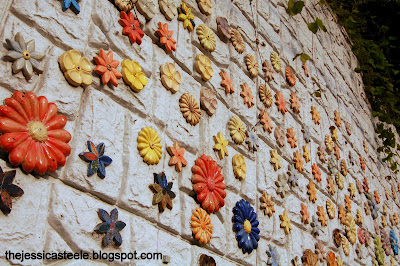 To get there, take the red line (Line 1) to Toesong Station (Stop #109), Exit 6. Walk straight until you see the PNUH  (Pusan National University Hospital) Cancer Center on your right. Cross to the same side and take the 2 or 2-2 bus from the small bus shelter there. It takes about 10 minutes, disembark at the top with everyone else! Return there when you're ready to head back to busy Busan.

Jessica
Busan, South Korea
I'm a lucky young woman who has had the wonderful opportunity to live and travel in South Korea. My time here has taken me all over the country, and this blog folows those adventures. Enjoy!

This site is dedicated to documenting my travels and observations of my home away from home, South Korea. All photos, writing, and opinions are my own, unless otherwise stated, and I'm darn proud of it!
Thank you, and enjoy your stay on my site. Come back and visit soon!

I Write for The Korea Blog

I'm an official blogger for the Government of Korea!

Love Me Some Letters